Upper Bullens Blue said:
I'll be interested to see if this sponsorship deal stops people buying replica shirts. I won't be buying one on aesthetic grounds - that logo is dreadful - rather than on moral grounds (I'm really not all that outraged by gambling).

But, if it's true that 75% of fans are against the deal, then I'd expect to see very few fans wearing Everton shirts with the Stake.com logo at Goodison next season.
Click to expand... GrandOldTeam said:
Stay tuned mate GrandOldTeam are going to be selling replica shirts with this on the front

In fairness anybody who gets a load of t-shirts with that printed onto it from St John's Market will make loads of money outside Goodison on a match day.

I’m not outraged but this at all really. They’ve gone for the most money they can get which is exactly how the world we all live in works.

Yeah it’s a crap sponsor but in a few years there’ll be another one.

Cels said:
Lots of faux-outrage and fake morality. Has anybody mentioned that they'll not go to another game until Everton drops their sponsor, yet?
Click to expand...

How would you know it's fake. People can be disappointed about commercial decisions that the club makes. You're obviously fine with the sponsorship deal and our owner being a proxy for a Putin-backed oligarch, fair enough, that's your discretion, but people can have an opposing view that is genuine and reasonable. You disagree with them, disagreement is an important part of a free society, you just don't have to be a blert about it.

damn looks awful too on a shirt allen said:
This is my view, too.

Even that would be easier to swallow if it'd been a significant improvement on our Cazoo deal. But it isn't.
Click to expand...

Stake are far more environmentally friendly than Cazoo cars…bit of perspective before the condemnation…..

GrandOldTeam said:
The Times etc claim Everton ended their sponsorship with Cazoo, which if true you'd say that would have been the easiest deal?

Though I do wonder if we had a USM related sponsorship lined up when we ended Cazoo, only for a massive spanner to be thrown in and it's left us scrambling.
Click to expand...

peteblue said:
Stake are far more environmentally friendly than Cazoo cars…bit of perspective before the condemnation…..
Click to expand...

Crypto's environmental impact is eye-watering. It's an industry that doesn't need to exist, and could very well cook the planet. That's without the social impact.

Not the end or the world, but disappointing nevertheless.

EU court. Not sure if you are aware but we left the EU.

UK restrictions will still be in place.

bignev23 said:
This really is the age of the Bellend isn’t it? That’s what my mate said today.... do you agree?
Click to expand...

People have always been that.

It is just more obvious these days with more platforms to state an opinion.

Player Thread Sponsor
An interesting article on Twitter from the Telegraph :

Everton have signed a gambling company as their main shirt sponsor in defiance of plans to ban such deals and despite previously stating they would ideally not do so.

A government source told Telegraph Sport the club had made “a real strategic error” by agreeing a minimum three-year partnership with Stake.com ahead of the imminent publication of a White Paper following a review of the Gambling Act.

Campaigners against front-of-shirt gambling sponsors also condemned the club for a “remarkably short-sighted” decision during a “cost-of-living crisis”, adding: “How can Everton continue to call itself ‘The People’s Club’?”

The forthcoming White Paper had been due to stop short of outlawing such deals, with ministers expecting Premier League teams to adopt a voluntary ban.

But the Telegraph has been told that could change after financially-stricken Everton announced a record partnership worth more than £10 million-a-year on the same day top-flight teams were due to discuss the issue at their annual general meeting in Harrogate.

“It’s a real strategic error by Everton and might force the Government to go further in its plans around sponsorship,” a Whitehall source said. 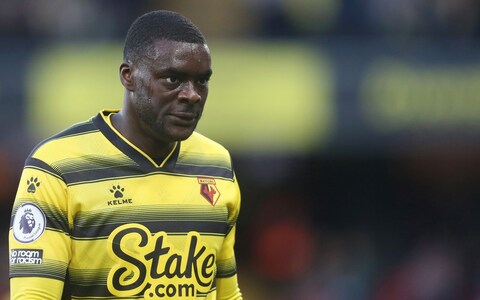 Stake.com sponsored Watford last season CREDIT: Rob Newell - CameraSport via Getty Images
Everton signed the deal barely two years after terminating a similar partnership with Kenyan gambling giant SportPesa two years early, with chief executive Professor Denise Barrett-Baxendale stating at the time: “In an ideal world, moving forward, we would look to have a different type of sponsor on the front of our shirts, like all football clubs would, but that is a commercial decision that we make as a football club.”
They subsequently signed a three-year contract with online car retailer Cazoo but terminated that a year early as well.
Their deal with Stake.com, which sponsored Watford last season, comes after they suspended all commercial and sponsorship activities with companies linked to Alisher Usmanov, who was sanctioned over Russia’s invasion of Ukraine.
That compounded record losses of £371.8 million posted by the club in the previous three financial years.
Leeds United and Burnley last month threatened to sue both the Premier League and club over the scale of the losses unless they could prove how they had lost so much without breaking profit and sustainability rules.
Everton insisted they had complied with those rules.
Days later, Crystal Palace became the first Premier League club to ditch a gambling firm as their main shirt sponsor amid plans to ban them.
Everton’s Stake.com partnership was condemned by Charles Ritchie, co-founder of Gambling with Lives, who lost his son Jack aged 24 to gambling-related suicide five years ago.
He said: “To announce this partnership on a day when research reveals hundreds of thousands of people are losing thousands of pounds each year on the most addictive online gambling products – with a third of these from most-deprived areas – is remarkably short-sighted, especially during a cost-of-living crisis.
“There are more than 400 gambling-related suicides in England each year and the way in to gambling for many is through football. Many Everton fans also come from deprived areas and many will become addicted to gambling and, tragically, some will die.
“How can Everton continue to call itself ‘The People’s Club’?”
Prof Barrett-Baxendale said: “Stake.com is an ambitious organisation with impressive growth plans and we’re all very excited to enter into a partnership with them at this stage in their journey.
“My talented colleagues in our new revenue team have made excellent progress in recent months and worked tirelessly to secure what is the biggest main partnership deal in the club’s history – I’d like to congratulate them on this achievement and, on behalf of everyone at the club, express my gratitude to Stake.com for choosing Everton as a long-term partner.”
end

hayatcokgarip said:
damn looks awful too on a shirt

To be fair, it doesn't help they they already look like a jarg bumble bee in that kit. The sponsor just doesn't help
Q

Bedfordblue said:
There was only 1 year of Cazoo left iirc so maybe veiw it more are guaranteeing £30m over 3 years rather than £9.6m over 1 year.
With the current global financial outlook it makes sense.
If the there’s an upturn in the economy or performance that will generate more, I’m sure the will bin off Stake at the earliest opportunity too.
Click to expand...